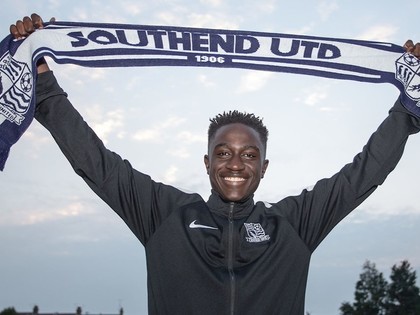 Eighteen-year-old, former Hatch End High School student Elvis Bwomono (who left the school in 2015) has recently signed a three-year contract to play for League One side Southend United as a professional.  Elvis, who was named as their Youth Team Player of the Year in 2016, has only recently made the transition to first-team football, making his ‘Shrimpers’ debut last month in the Checkatrade Trophy against Gillingham F.C.

Following his sixth appearance for the club, and a Man-of-the-Match performance against rivals Rochdale, Elvis said: “It’s just wonderful – something I have dreamed of and wanted to do since I was a kid – for it to finally be happening at Southend, and for the club to want me as a professional player, is very pleasing.”

Elvis’ PE teachers at Hatch End High remember him as an enthusiastic and talented
sportsman who was always very passionate about his football. They support all young
people to achieve their dreams and put in place flexible measures to ensure academic
progress is never compromised.

Click on the following link to view the full article featured on the Harrow Times website:
http://www.harrowtimes.co.uk/news/15643190.A_promising_young_Harrow_footballer_s_career_is_starting_to_look_up/